skip to main | skip to sidebar

Citizens can now access the internet from their laptops while sitting in Sambhaji park on J.M. road. The Pune Municipal Corporation (PMC) successfully took its first step towards making Pune the first ‘unwired’ city of the country here on Monday.
The ambitious Worldwide Interoperability for Microwave Access (Wimax) project announced by municipal commissioner Nitin Kareer last year took off on Monday for areas near Sambhaji Park and the PMC headquarters.
The project, which is being implemented by both Intel Technology Private Ltd and Microsense, the technical advisors and service providers respectively, will be extended to an area of 20 sq km area including Deccan Gymkhana, Aundh, Baner and Model colony within four months. The entire city will be covered in the next 12 to 18 months, said Kareer at the function to launch the project.
Union agriculture minister Sharad Pawar, the chief guest for the function said that the project initiated by PMC will be useful to all sections of society and professionals from all fields.
“A lot of avenues will open up for the youth with the initiation of this revolutionary project. Pune is leaping forward in the field of information technology, biotechnology and nanotechnology. Wireless connectivity will surely help boost these fields further,” Pawar said. Explaining the technicalities of the project, Kareer said it was an attempt to provide easy internet access to citizens in all open spaces in the city at affordable rates.
“Currently, the service will be provided free of cost. When it is extended to the 20 sq km area, the project will be commercially launched and nominal user charges will be charged for which the modalities have to be worked out,” Kareer said.
He pointed out that the project will be useful to schools and that municipal schools will also be covered under it. “The PMC will pay the user charges for municipal schools. Some 30 schools falling in the areas covered in the first phase will have access,” he said.

via Times of india

MyVideotalk - A company offering web based video email video conferencing and video on demand services, is ready with technology to stream to mobile and hand held devices which will make great use of this wireless technology. Pune citizens will now be able to access recieve and send video emails to each other. Better times are round the corner
Posted by Jitendra Jog at 7:22 AM 1 comment:

Mrs. Amie Gill - Executive Vice President and Co-founder - MyVideoTalk , last night announced - to a packed global webconference room - the release of its latest Sizzle site.
CLICK TO SEE
The site is there for all customers to see the Power of the MyVideoTalk technologies. Displaying the three main technologies that MVT introduces to the world, the website focusses on

1. MyVideoWebMail - The power of television advertising with the simplicity of email. MyVideoWebMail offers the most robust, feature-rich streaming video application online to easily create and send video emails!

2. MyVideoWebMeeting - your own global web conferencing & broadcasting System.
Our web-based system offers the easiest way to set up your own global boardroom. Now you have the internet's best solution for local, regional or global real-time video meetings!

The Company a successful USA based multinational is already represented 76 countries is now in pre-launch in India and Asia. It is the right time to get involved with this company simply to use its products, and or benefit from the excellent affiliate plan it has put together for all its representatives. The MyVideoLearning package - piqued to be the world best e-learning portal is also scheduled to be released soon.
Posted by Jitendra Jog at 10:47 PM No comments:

In little more than a decade, the Internet has revolutionised the way the majority of us work, communicate, and even shop. A new study says there are now more than 100 million internet sites on the worldwide web, and growing at more than 10 million pages per day But if the number of websites is any indicator, then today the Internet is soaring in popularity. Used for everything from grocery shopping to finding a mate, the Internet has become an everyday part of our lives.

From 1995 when, according to the figures, there were only 18 million recorded websites. It took until May 2004 to reach the 50 million milestone. A little over two years later, according to their new study, we've now hit the 100 million mark. The phenomenal rise in Internet use can be attributed to increased broadband access as well as the rise of communication services like email and chat and also sites that let people create their own websites / blogs for free. the Internet has become an indispensable part of everyday living.

Experts and online marketers predict that websites that dont have video content in the next 24 to 48 months will be treated as outdated. MYVIDEOTALK allows anyone to put video on websites with relative ease ... simply copy the html code and paste. Myvideotalk-India also offers a suite of products that include video emails, 24*7 video webconferncing, and soon to come videolearning all at 1 dollar a day to its representatives.

MyvideotalkIndia - A successful USA Based multinational present already in 76 countries is currently in its prelaunch stage in india and through out the far east and it is the right time to capitalise on this awesome opportunity.
Posted by Jitendra Jog at 9:50 PM No comments:

According to Point-Topic, a worldwide broadband research firm, South Africa showed a growth of 23.7% in ADSL connections during the second quarter of 2006. The number of ADSL lines increased from 143,509 to 177,500 in the three months from April to June 2006.
The most significant growth was from Greece with 44.1%, followed by India in second place with 41.2%. India is also currently growing internet user base by over 350000 users per month. Myvideotalk A successful USA based MNC which offers streaming media solutions, like video emails, web conferencing and soon to come videolearning - is in prelaunch stage in india and rest of asia is well and uniquely positioned to benefit from these growth rates
Posted by Jitendra Jog at 6:06 PM 1 comment: 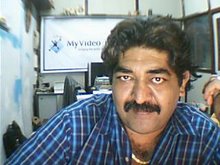